Once upon a time, the NBA was all White players, or should I say “Whites Only”. Let that sink in for a minute. I know it sounds like the beginning of a twisted fairly tale. But it’s actually true. Believe it or not, Black people were once not allowed in the NBA. Then again, Black people used to be slaves so….. I guess it’s not too hard to imagine. But that was a long time ago. Times have changed, and so has the NBA.

Officially, the NBA was integrated in 1950 with it’s first black player credited as Earl Lloyd. What happened after that, I don’t know. I’ll let you do your own history on that era. Fast forward to the 1980’s and things really took off for African Americans in the league with a new influx of Black Super-Star players fans all know today like Julius “Dr. Jay” Erving, then Erving “Magic” Johnson and eventually, by the decades end, Michael “Jordan” Jordan would take the game by storm, and things would never be the same.

Ever since, say the 1990’s (when I first began watching), I can’t remember a league that wasn’t dominated by Black players. Of course, prior to the 21st century life in the USA as a whole didn’t mirror an even playing field for both Black and Whites – not in the work force, education or sometimes even basic human rights- but it was pretty much good to be African American…. if playing Basketball. At the time of the Sports Illustrated article pictured above (1997) it’s clear the tide was really starting to change. Blacks were becoming the overwhelming majority in the NBA and Whites were marginalized for whatever reason. Fast forward 20 years, turn on NBATV and it there’s barely any White players on the court.

As far as Basketball and race are concerned, the conversation literally went from “White Men Can’t Jump” when I was growing up to “can white men they even play the game?” in 2017. Somehow a harmless stereotype evolved to an out right exclusion of White americans from the game they once dominated numerically. It’s like things did a complete 180 degree turn in the span of 67 years. What happened to the White American basketball player in that time span?

This latest edition of the monthly takes on the question above, and more importantly “how”. You might have noticed I’m writing this as Black History Month comes to and end. It’s no coincidence. There couldn’t be a better time for such a topic. This post also happens to be on the heels of yet another NBA All Star weekend, one in which Gordon Hayward was the only White American player to be named an All-Star, but I still can’t decide if that’s a good thing for the NBA or not; having one “token White” player in the game – a title usually reserved for Kevin Love. For me it definitely shed more light on the problem.

For Hayward, beating the odds and becoming a NBA All Star must be bitter sweet since he can’t even share the experience with any player of his same race. I imagine its no different from the feeling I had in College in upper level courses with little or no Black male enrollment. But let’s stay on topic here. It’s one thing to for a White player to make it to “All-Star Sunday night” so congrats to Gordon. It’s a completely different struggle, however, to simply “make it” in the NBA.

Case in point, there’s former BYU Star and 2011 AP College Player of the Year, Jimmer Fredette, once hailed the NBA’s “Great White Hope” who is now out of the league and currently playing in China. Meanwhile, 5’9 Isiah Thomas who was chosen dead last in the same 2011 NBA Draft which Jimmer was a lottery pick is now a MVP candidate. I’m not saying any of that has to do with Jimmer being White and Thomas being Black, but it definitely doesn’t help the perception of Whites inability to find success in the NBA. 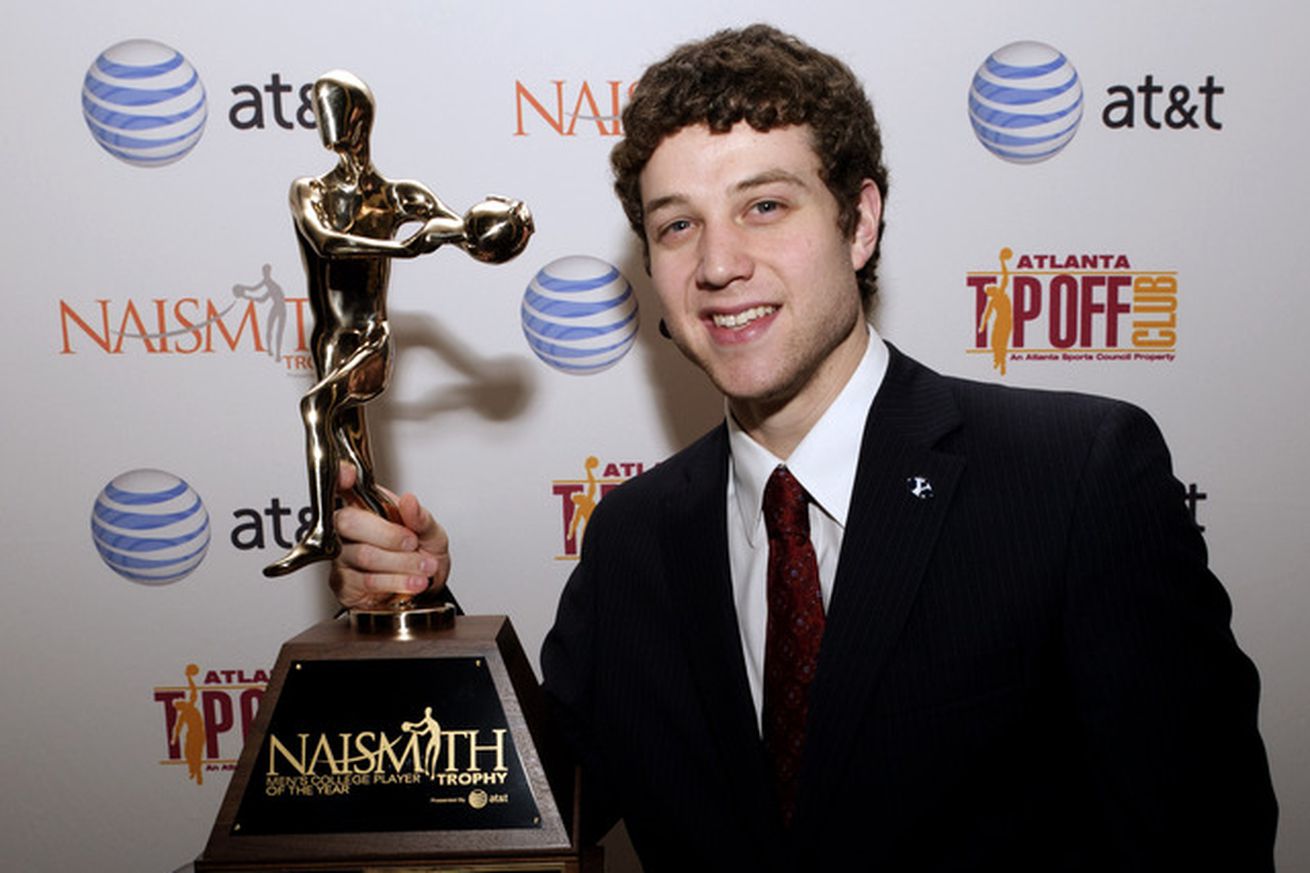 But who’s talking about even having “success” in the NBA. Just making to the NBA is hard enough, no matter the race or ethnicity, however, it’s much basically impossible if you’re White. Want proof, just turn on your TV and look at a NBA game. A basic eye test is enough. Better yet, take a look at a list of the Top College NBA prospects. This year, 14 out of the top 15 picks in this Mock Draft picks are Black or international. The one white American is Gonzagas Center Zach Collins and it doesn’t differ much picks 15-60.

As an avid basketball fan seeing this disparity over the years, I know I’m not the only one who thought to myself something isn’t right. It doesn’t make sense. Whites if anything should have an advantage in Basketball like… um, basically everything else in life. But nope. Ever since Larry Bird retired and Jordan started to dominate… it’s been all downhill. I can’t think of another White American superstar since the Jordan era began other than maybe Jason Williams, and even he was technically “Black” as it gets. His nickname was “White Chocolate”. But White players like Williams are rare. White NBA stars are few and far between and regular starters have been on the decline over the past 5-10 years to the point in the todays NBA you’ll be lucky enough to catch one coming off the bench as a 6th man. This can’t be fair, right?

Not to ignore players like JJ reddick, Kyle Korver, Chandler Parsons, Cody Zeller, and Doug McDermott who are certainly talented and deserving of being in the NBA, but it’s a Black man’s league and even they know it. They’re fortunate enough to be starters and star players in a league that’s unfortunately set up against them. If not for the severe lack of Black franchise owners, equal opportunity for new Black coaches, you could actually say Blacks run the NBA. Meanwhile, White ballers face a myriad of obstacles in just trying to get to the next level. They are underrated, undervalued, and underestimated at every level just based on their color and because of this are underrepresented in the NBA. It’s not a issue of talent or if they can play at the highest level as much as it is whether or not they’re given a fair shot to begin with.

Today’s popular Basketball culture favors Black players over White ones. As far as the game is concerned they have a reputation of being naturally “more exciting, faster, bigger, stronger, jump higher” and are portrayed as so in the media. But these are just stereotypes, right? Or could the overwhelmingly high numbers of Black in the NBA be indicative or some inherent athletic superiority? That can’t be true, because if it is, it opens up a slippery slope for racists everywhere who would love to list what they believe Blacks are genetically inferior at. The fact is, every healthy human is born the same two legs, arms, hands and feet, regardless of race. Lets just say, maybe there are other contributing factors keeping the White athlete out the NBA.

Remember not long ago the NBA was the majority White, but now White athlete with NBA “hoop dreams” must question themselves is it’s even worth trying to make it in a Black league. Funny how the tables turn. Being White is such a disadvantage in Basketball that some have suggested they start their own league. A ridiculous idea, no doubt, that echoes this Nations history of segregation instead of any type of real solution. Still, I’d say the state of the NBA is to the point that it’s so Black that any white player can cry “reverse discrimination” and you’d have to at least hear them out. But the NBA wouldn’t do anything about it even if they did.

Despite the NBA lacking White players, the league has no shortage of White fans. It’s it’s biggest stars, however are not. Matter fact, ever since Larry Bird retired, the “face” of the NBA has continually been a Black one from Jordan to Shaq, Penny Hardaway, Iverson, Kobe, Lebron and most recently Stephen Curry. Mind you, Curry is about the closest thing the NBA has seen to a White American Superstar in a long time. If you think Curry was popular last year, imagine how big a modern-day Larry Bird would be. Probably equivalent to the “Linsanity” we all witnessed 3 years ago. I know seeing another Larry Bird is a long shot, but having a few more “Gordon Haywards” in the league would be a nice consolation price, at the least.

This post isn’t intended to bash White basketball players. I’m not suggesting you to feel sorry for them either. That would be distasteful during a time in the USA we traditionally celebrate all things Black. But rather, let’s celebrate Black excellence in Basketball even if the scales are tipped a little in our favor for once. The NBA might be the only profession in the USA that it overwhelmingly pays to be Black… and Black are really getting paid Millions at that. Yea Black people have it tough still, and certainly have been through a lot thought out history but for the past say 20 years Basketball has been one of the high points.